The 20 minute Graphical Modeler based on Eclipse

My last post about the flow model simulation was really missing a demo so that you get the "live" aspect of the model construction. No problem, that's a good occasion to show you a secret product we've been building on top of the Eclipse Modeling projects since a few year now. In my dictator position on this product you can guess I'm quite excited to show you that, nothing public came out about it since now but the first public release is not so far...

Let's stop the teasing and watch the content, here are a few flash demos . If you're just interested in the resulting modeler, go directly to the last one showing the live model design. If you don't understand what's about that flow stuff or if you're wondering how all that load and capacities properties gets updated, have a look on my preceding post. 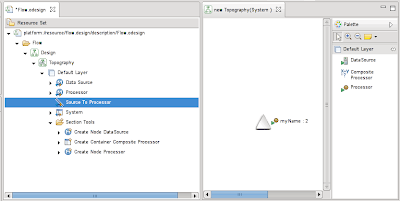 The first demos are showing the graphical modeler construction. In a few clicks, just defining the concepts you want to display, how you want to display them and how to retrieve them in the semantic model. You get your modeler in a matter of minutes, and you really should not need more than that as it's quite simple.

I really like the "specifying the modeler and using it side by side" feature even if you need a big display for that and here for the demo I have no choice than scrolling.

The next demo is focused on defining "conditional styles" so that the graphical shapes changes depending on the changes in the semantic model (node/edge sizes and colors), in this demo I also specify the fact that a CompositeProcessor reuse the graphical mappings define for the diagram and that I should be able to create a sub diagram on a CompositeProcessor.
The request langage I'm using is Acceleo, but you could also use OCL, I tend to prefer simplicity ;) 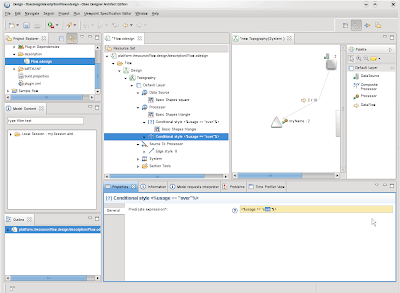 And at last, after a bit more tweaking off stage, the usage of this finished dynamic modeler.

So, to be fair, the final modeler is more a 25 minute modeler than 20, but that said, I get a first working modeler a the minute 10 of the first demo.

Be sure that's only a tiny portion of what we've been able to achieve leveraging the Eclipse Modeling components (EMF, GMF, Acceleo, Compare just naming a few...) and the Eclipse Platform : graphic modeler are one thing, but other representation matters and I'm not even speaking about the "full viewpoint support".