Eclipse Galileo aka 3.5 simultaneous release is coming soon. We now all have this fuzzy feeling when development stops and we stay here a bit dizzy, wondering what we'll do next.

Yet another release, yet another step in the direction of the best IDE, of the best Platform, of the best Modeling tooling or whatever goal you have. The eco-system is so diverse, every new release can't be reviewed as whole, you can only savour "just a bite of this big cake".

Even if I'm quite sensitive to all the good stuffs added in the platform: as a plugin developper these features makes me happy everyday, I'm gonna focus on only *some* features of the modeling package for Galileo...

Each year a few more modeling projects are joining the team for the simultaneous release, you're now getting a full-fledge modeling environment for Galileo.

Let's design stuffs, that's what models are bout, right ? Thanks to EcoreTools, you now have a nice modeler for your domain models. I only want to say one thing: the sexyfication of this modeler is great :) You now have nice gradients, shadows, and many views bringing you stuffs you're used to in the Java tooling : Class hierarchy, Show references and so on.. 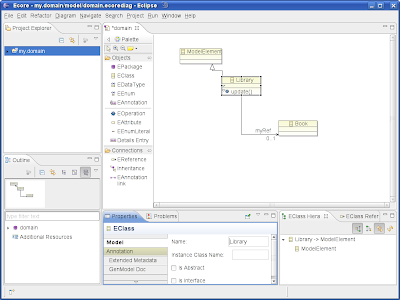 If you design your models with a team, you'll be happy to see EMF Compare when you want to merge your changes with those made by your coworkers 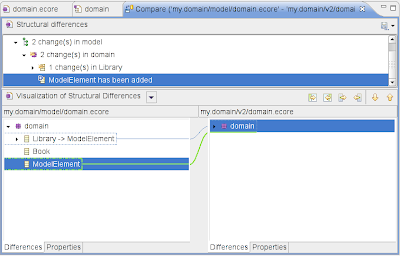 Compare graduated and has now the 1.0 stamp ! It's seamlessly integrated with CVS, SVN, GIT and can diff and merge any kind of models.

Speaking about design, xText allows you to design your models using a textual syntax, that's pretty cool and the team worked hard this year, check it out !

Once you design your stuffs, most of the time you want to transform that into something you can use for your development. There are basically two options here : model to model transformation or model to text transformation. Each one having pros and cons depending on your use case.

Eclipse Galileo provides pretty much anything you might want to transform your models, some of them being based on standards :
JET have been here for quite a long time now providing a steady and stable code generation technology.

Work on ATL has been focused on user interface and API, that means ATL is now easier to use from both an end-user point of view and developer point of view.

I looooove the new wizards compared to the old one :) 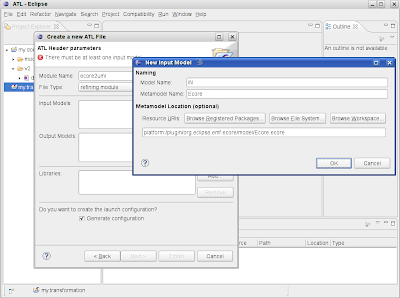 Acceleo is a complete rewrite from the Acceleo 2.x versions which made our team "Eclipse Award Winners". One of the thing which is cool with this rewrite is that from the beginning we're making sure the core generator is "standalone" and might be used without Eclipse, something we had a hard time to provide a posteriori with Acceleo 2.X . Another common need is the ability to easily launch your generation from your java code, it's most of the time quite tricky when you use your own language.

The Acceleo team came with a nice solution : next to every "main-like" template we generate a Java class which is this template API. Then you can easily launch the generation, you just have to create an instance of this java class and launch it.

Here is a small and dumb template : 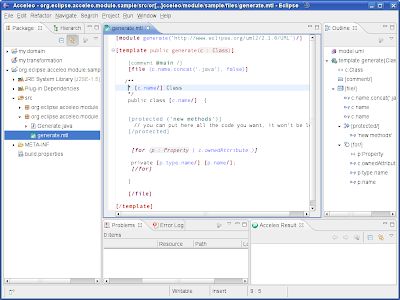 And here is the corresponding Java launcher : 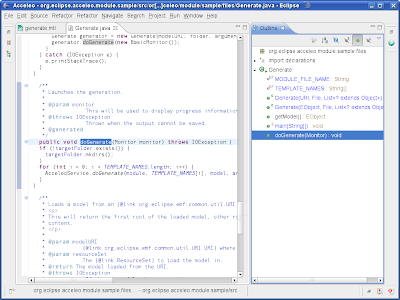 Kicking your generation is just a class instantiation and a call to the doGenerate( method ! You have no excuse for not integrating your code generation into your editor.

In a nutshell Galileo bring the best of modeling with pragmatic components, you can't miss that !